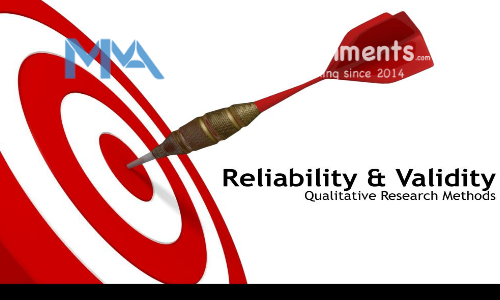 Reliability is the degree to which a scale is able to produce consistent results when repeated measurements are taken under the same situation. This simply means that if the results appear similar again and again, provided that the condition is the same, then we refer to the measurement as reliable. For instance, when you weigh the same quantity of rice on a beam balance repeatedly with the result remaining the same all through the measurement process, you refer to this weight as reliable. This also means that the quantity neither decrease nor increase on being measured multiple times.

Validity is the extent to which the research instrument measures what it is intended to measure. Thus we can say that a valid instrument is always reliable. In simple words, validity is the accuracy of the measurement. If the research depicts high validity, this means that it produces results that correspond well with characteristics, variation and real properties in the physical or social world. So, if a method is not reliable, then it is not valid. For instance, when you measure your body temperature with a thermometer, it shows a huge difference in the measurements taken each time. This means that you cannot measure the accurate temperature of your body, and thus the instrument is not valid. Similarly, if a person infected with a disease goes to several doctors to clarify his disease and each time he gets the same response from different doctors that too at different diagnostic centers; this means that it has high validity as the measurement of a medical condition and the person is actually suffering from a disease.

Uses of Reliability and Validity

We call reliability the overall consistency of a measure. Here are some of the different types of reliability-

Inter-rater reliability: It assesses the degree of agreement between two or more raters in their appraisals. For example, a person gets a headache, and different doctors would advise him differently.

Test-retest reliability: It assesses the degree to which test scores are quite consistent.

Inter-method reliability: It assesses the degree to which test scores are consistent, but there is a variation in the methods employed. It can also be called parallel-forms reliability.

Internal consistency reliability: It majorly assesses the consistency of results across items within the test.

A reliable protocol is used in computer networking as a communication protocol that further notifies the sender about a particular data. Thus we can say that a reliable service is the one that notifies the user about the delivery, while an unreliable one does not.

Validity is one such aspect that corresponds directly to the real world. We can say that it is the degree to which the tool measures what it claims to measure. Validity is often called test validity in psychometrics. Validity is known as the property of an argument in logic; when the conditions are true, then the truth of the conclusion follows. The different types of test validity are as follows-

Construct validity: It is the extent to which operations of a construct measure a construct that is further defined by a theory.

Criterion validity: This involves the correlation between the test and a criterion variable that is known as the representative of the construct. It is said to comate the test with other measures or outcomes that have already been taken as valid.

A reliable instrument need not be valid, but a valid instrument must be reliable.

In terms of multi-item scale, validity is considered more valuable than reliability.

Reliability focuses on precision, while validity concentrates on accuracy.

So, this was all about the differences between reliability and validity. Apart from this, if you ever need help regarding your academic papers or assignments, feel free to contact our online assignment writing services for professional help and guidance.

What are the benefits of CSR?

A short guide on Alliteration and its use

Academic writing often involves the use of different aspects and concepts, but at times these…