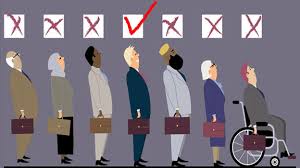 Cultures, beliefs, religion, appearance, languages, etc. vary widely when it comes to individuals. Such diversity, even though desirable to create a unique society with varied and diverse people, is also the root cause for discrimination amongst human beings. At times, other factors such as disabilities or physical injuries to the body also become the causes of discrimination. The effects of discrimination on an individual are severe, and have more repercussions that one can even imagine.

Knowingly or unknowingly, a lot of us partake in this unhealthy practice, and end up hurting those around here.

This blog will discuss the different types of discrimination that exist around us, so that we can become more aware individuals. This is necessary to know, in order to understand how discrimination affects the lives of people.

The various types of discrimination

Indirect discrimination occurs when a practice, policy or rule that is applicable to everyone in the same way has a worse effect on only a select group of people. In other words, indirect discrimination can take place even when you are treated in the exact same way as other people, because of your religion or gender or some other characteristic.

Take the simple example of wearing certain jewellery as a mark of your religion. If your employer introduces a certain dress code in the office, which prohibits you from wearing the jewellery, then you are a victim of indirect discrimination.

Victimization is basically singling someone out and causing him or her to be treated unfairly and made to feel as if he/she is a bad person. When you treat someone poorly and discriminate against them, it is known as victimization.

Harassment is the type of discrimination that hurts victims both mentally and physically. People can harass you due to your age, gender, religion or simply because you have some disability. When harassing others, people use means like rude gestures, written and spoken words as well as images and jokes in order to offend, humiliate or intimidate another individual.

Sexual harassment is just like regular harassment, but the only difference is that the basis for such discrimination is sexual. Sexual harassment is very very common in the workplace, and also in other professional and social situations; and often involves the making of unwanted sexual advances and/ or obscene remarks.

Discrimination as a result of prejudices occurs when people form opinions about others without even knowing the whole story, and then start to treat them differently.

For instance, imagine that it is the first cricket match for the son of a renowned cricket batsman and a normal kid. Who do you think will play better? If you think that the former will perform better, then you are also prejudiced.

Stereotypes are a step ahead of prejudice, when you start to have distorted views about something. For example, that sports are for boys and pink is for girls is a common stereotype.

As social beings who live in a society, we tend to be influenced by these stereotypes since a very early age. This then leads us into having strong ideas about things, people and ideologies. And as we age, our hatred for these particular things starts to increase, which causes us to discriminate and show bias.

This article was written by an assignment expert from MakeMyAssignments. For more such blogs and discussions on these kinds of burning issues, visit the blog section of the website and feel free to share your valuable opinions with us. We also provide excellent assignment writing services to students all across the globe to make sure that they score well in their exams and can find excellent jobs for themselves later on. Our assignment services are reliable and affordable, and will go a long way in helping you achieve your long term goals!

How to manage stress while studying?

The role of entrepreneurship in economic development

Entrepreneurship includes everything, right from the establishment of a new business to the successful management…