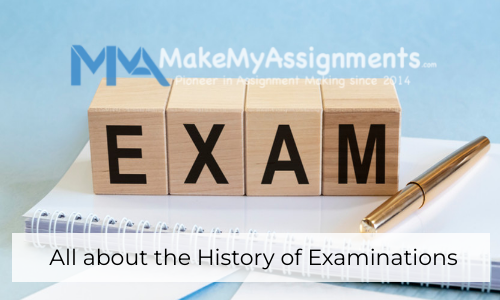 Exams are the scariest thing in the life of students. If you are a student, then you might have wondered at some point or another about the person who invented exams. Well, in this blog, we will learn about the history of examinations and who invented them. Let us take a detailed look at it.

An examination is a formal assessment conducted to evaluate the knowledge and skills of a person in a particular subject. Apart from the subject knowledge, it also assesses the student’s aptitude, learning, physical fitness, and other necessary skills. Exams are conducted to measure all these qualities of a student based on the answers submitted by them. The main purpose of exams is to identify the personality, memory, and revision skills of students. It also motivates the students to improve their learning and knowledge.

Based on previous studies and historical evidence, Henry Fischel is the one who invented exams. He was the first person who introduced the philosophy of exams. His idea of examination focused mainly on two aspects – interior and exterior testing. According to him, examinations would help evaluate the student’s knowledge and understanding of the subject that has been taught in the classroom.

Based on the research, the first country to implement the concept of exams was Ancient China. In the name of imperial examinations, people were selected based on a national assessment for government jobs and other government-related work. But it was during the Sui Dynasty in 605 AD the exams were set up for the first time. Later, in the year 1905, China abolished the appointment system through exams.

After China, it was England, during the year 1906, who adopted the examination system to select candidates who were eligible to serve in the Majesty’s civil service. Later, the same concept of assessment was adopted in academics as well. With a few advancements, examinations became a popular tool of assessment for the teachers that could help them assess the knowledge and skills of students.

Later on, the idea of conducting exams in the academic system was spread to all parts of the world, and many countries came in its favor. Even today, different types of examinations are conducted by various countries based on the needs of their educational system. But it was Henry Fischel who first introduced the core idea of exams into academics. He is considered to be the founder of examinations.

The concept of tests and assessments

If we speak about modern times, the education system has changed drastically so is the examination system. Exams today involve various tests and assessment stages like research papers, essays, multiple-choice questions, term papers, and personality tests. Other than the academic purpose, many organizations also use a holistic approach for the job interview process. This involves a lot of individual components, which are further evaluated to identify the actual competence of a person.

Difference between tests and exams

For many students, writing homework and assignments is quite troublesome. At times, it gets difficult for them to manage both their academic and personal life. In that case, they can always seek help from online assignment writing experts, who deliver the best quality assignments at affordable prices. At Make My Assignments, we make sure that students receive plagiarism-free assignments that are well-researched and authenticated.

What is BIG DATA?

How to deal with failure?

So listen up folks, as cliche as it sounds, failure is an inescapable, inevitable and…

USEFUL WAYS OF AVOIDING ANY KIND OF PLAGIARISM