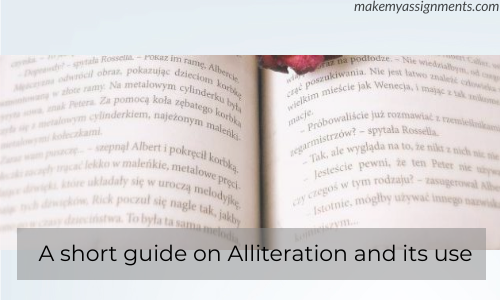 Academic writing often involves the use of different aspects and concepts, but at times these concepts can be quite difficult to perform and comprehend. Take alliteration, for example, which is an important aspect for writing and is required in many creative papers and essay writing process. Many students face issues while adhering to the features of alliteration and its usage in the content. In case you face the same difficulties in applying alliteration to your content, then this blog will help you get a good insight into it.

Alliteration is a commonly used writing technique (literary device) that involves the successive repetition of the initial consonant sounds. This means that in a sentence, the beginning sounding words are repeated again. Alliteration tends to bring a poetic meaning to your content. And the repetition of the sound at the beginning of each word creates a flow and sound effect in a sentence or poem. It is consonants that define the real meaning of alliteration, not vowels. This literary technique can be used with the same sentences, phrases, clauses or even successive lines. The most commonly applied alliteration is tongue twisters.

General alliteration: This is the most commonly used alliteration form, where the repetition of the initial sound brings in the poetic form. So you can easily observe the use of general alliteration in your content, by witnessing the presence of the first letter being repeated in a series of words.

Consonance: This is the most commonly debated and tricky form of alliteration. The repetition of consonants under this category occurs either in the beginning, middle or end of the sentence. This style of alliteration is often implemented in prose and poem writing.

Assonance: When a vowel sound is repeated again at any place within a word, then it is defined as assonance. This concept is a bit similar to the alliteration structure but is often differentiated from the latter. While alliteration appears to repeat the phonetic sounds at the initial place in a word, assonance, on the other hand, make repetitions appear at any part.

Unvoiced alliteration: This highlights the aspect of pronunciation, where some letters in a word are left unvoiced and silent. Though they do become necessary as a component reflecting the alliteration aspect, but are not voiced either or are not spoken out in the form of speech.

The type and style of writing are what defines the nature and use of alliteration in that content. This technique is often employed by essay writers and specifically poets, who are keen enough to add that special sounding effect to their content and writing. The only good reason behind the addition of alliteration in their content is to bring the readers’ attention to it through sounds. Often words do not have the power to persuade the audience with its normal pronunciation and sounding, but the slightest of catchy aspect captured by interesting sounding words or phrases bring in a lot of attention from the readers’ side.

This also creates a great impact on improving the quality of your content and making it look more appealing among the audience. Therefore, every essay writer or student, who is keen enough to make his/content look more appealing and interesting, should add on this feature of alliteration to their content. Alliteration would further help them achieve their goals and ideas through their writing.

In a poem, alliteration tends to build a brilliant rhythmic pattern to your content, making it the most popularly used device by the poets.

Getting a good hand on alliteration and its use can shape the whole structure of your content, by making it look more fascinating and tricky in the eyes of the readers. Apart from this, if you require any kind of help regarding your academic essays or papers, feel free to contact our online academic writing services for professional help and guidance.

how to fight Senioritis

The Senioritis is the incapacitating disease that strikes high school and graduate seniors. As the…

Traits of an ideal student

Every child who attends school or college has one primary objective: that is to learn,…

How to curb exam anxiety

Anxiety is an unwanted friend at all stages of life. A child faces anxiety when…